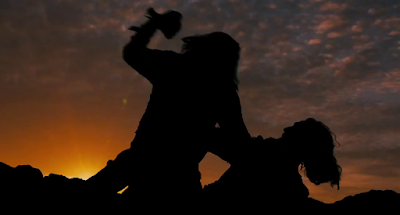 In Genesis 4:7 God tells Cain, “If you do well, will you not be accepted? And if you do not do well, sin lies at the door. And its desire is for you, but you should rule over it.” I feel that this translation, while basically accurate, misses the bigger part of what God is warning Cain about.

In fact, it would be better translated “And if you do not do well, sin lies at the door. And its desire is to master you, but you should rule over it.” That sounds a little more urgent. It is more forceful and (at least to me), a little more frightening.

I wonder if we often fail to recognize that sin is not a benign presence. Far too often we seem to treat sin as though it is passive. We say we “fall” into sin, as though it were a hole in the ground that we simply did not see and fell into. God never talks about sin like that. To Him it is something active. It is a hunter who tracks down its prey, waits until the opportune moment, then strikes out to tear it apart and consume it. Sin itself is really spoken of in the same way that Satan is: an active force out to destroy people and separate them from God.

James writes in 1:15 that “sin, when it is full-grown, brings forth death.” I don’t know about you, but I have never heard of a passive, benign object “bringing forth” anything. Only that which is active and capable has the ability to “bring forth” something, let alone something as enormous as death itself.

It is to our detriment if we fail to see sin for what it is. It is an active, predatory force on the lives of people. If we are not prepared to fight back against it, it will happily consume and destroy us. How often the Scriptures warn us to be prepared and to resist sin! But resistance is an action, and action will never be taken unless we believe it needs to be. If our view of sin is one of passivity, we will not see the need to mount a resistance until it is already upon us.

This is not something we can do on a whim with no forethought. Paul tells us to run the race like we mean to win it. In Ephesians we are told to put on the full armor of God. Both of these things take training in order to do well. Without proper training you will never get very far in a race. In a similar way without proper training it will be very difficult to wear and move in armor and use shields and swords. In both of these cases the one who refuses to train and prepare becomes a drain on those who do.

This brings us to the fact that fighting sin is not something we do alone. A relay racer who refuses training will cost his team dearly. A warrior who refuses to train could cost the lives of those next to him. One who does train and improve himself, however, becomes a bigger and bigger boon to those around him over time. In the case of sin, God has given us the church to encourage, edify, strengthen, and hold one another accountable.

Let us be a church who takes sin seriously, who trains to fight back against it, and who strengthens each other to live as we are called by the King Above All.
Posted by Jared Kemp at 8:37 AM 1 comment: